Chris Cillizza at the Washington Post laid out the flaws of the potential GOP contenders for president Sunday. Here is what he had to say about South Dakota’s John Thune:

“John Thune: The senator from South Dakota — like many of his Republican Senate colleagues — voted for the Troubled Assets Relief Program in late 2008. Many conservatives view the vote as a sort of scarlet letter, a massive government bailout that is anathema to their limited-government philosophy.”

Read his take on the other possible candidates here.

Jill Lawrence at Politics Daily has written an in-depth analysis of a potential John Thune run for the presidency in 2012. While she believes he has his charms, it seems that she is a little skeptical of his chances.

Who’s John Thune — and Why Is He on the GOP Short List for President?

John Thune is on every short list of Republican presidential prospects, which for most people raises two questions: Who? And why?

The South Dakota senator is renowned in political circles for ousting Democrat Tom Daschle, the Senate majority leader, in 2004. But he’s not associated with any particular issue and he’s certainly not a household name.

The past few days have shown why that could change, and not just because Thune is tall, dark and handsome. To be sure, he and New York Democrat Kirsten Gillibrand more than lived up to their advance billing as bipartisan nerd prom king and queen when they strolled into the House chamber together for the State of the Union address.

Yet the day had begun even more auspiciously for Thune, 50, when Senate Minority Leader Mitch McConnell tossed out his name as a rising Republican star. “I think he should” run for president, McConnell said at a Politico Playbook Breakfast. “He’s a very sharp, capable individual — good speaker, good leadership qualities, which I see on display every week in the Senate. I’m a big John Thune fan.” 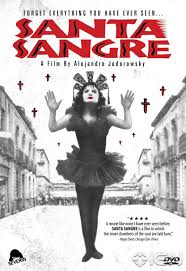 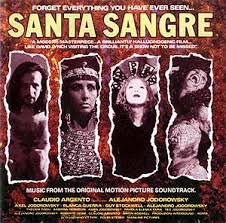 I hope to cuddle up with “Santa Sangre” this weekend.

It was directed by Alejandro Jodorowsky, a Chilean director who is what I would call a true artist. He does not conform to the normal narrative rules of filmmaking and instead creates something wholly unique.

Many of his films became available earlier this decade — “Holy Mountain,” “El Topo” and “Fando and Lis.” All are terrific maelstroms of madness that are perfect as midnight movies because they blur the line between dream and nightmare.

“Santa Sangre” is the one major film that has not yet been released on DVD in America. I’ve purposely tried to avoid learning much about it over the years in the hopes I would get to see it for myself.

Well, that day is here, and I can’t wait.

For the curious, here is a plot summary written by an IMDB reviewer: A young man is confined in a mental hospital. Through a flashback we see that he was traumatized as a child, when he and his family were circus performers: he saw his father cut off the arms of his mother, a religious fanatic and leader of the heretical church of Santa Sangre (“Holy Blood”), and then commit suicide. Back in the present, he escapes and rejoins his surviving and armless mother. Against his will, he “becomes her arms” and the two undertake a grisly campaign of murder and revenge.

As a young adult, I was a huge fan of comic books. I was a Marvel guy and didn’t see any reason to get involved in the D.C. universe. One of the comics I read regularly was “The Fantastic Four.” I haven’t read an issue in many, many years (and I’ve mostly avoided the movies, which I’ve thought looked underwhelming), but I still have an affinity for the characters. So it is with sadness that I learned this week that the Human Torch has “died.” The Associated Press was nice enough to write a story about the sad incident.

NEW YORK (AP) — Fifty years after cosmic rays transformed him into a man ablaze, Marvel Entertainment has extinguished the Human Torch’s flame and his life, too, as the pop culture purveyor of super heroes and villains embarks on an ambitious story line that ends the Fantastic Four.
In the newest issue of one of the company’s longest-running comic books, Johnny Storm’s life is taken amid a massive battle that writer Jonathan Hickman has been scripting for a year-and-a-half. Illustrator Steve Epting did the art.
While Marvel has made no secret that a member of the quartet, which was introduced in August 1961, would die, exactly who among the group would fall has been a closely held secret, until the release Tuesday of issue No. 587.
It’s the Human Torch, leaving teammates Mr. Fantastic, Invisible Woman and the Thing to pick up the pieces and move forward.
Hickman, along with his editor, Tom Brevoort, have been unsurprisingly mum on what the future may hold for the characters, but one thing is certain, the end is nigh for the Fantastic Four next month.
Brevoort, senior vice president for publishing at Marvel told The Associated Press that “588 is the final issue of the Fantastic Four. Beyond that, we’re not ready to say exactly what we’re doing. There won’t be an issue 589.”
All he would say about the future was that the various subplots and threads that Hickman has written “will converge in a new thing that will be exciting and different and yet, very familiar and very much the same.”
Hickman told the AP that the death is part of the natural evolution of his ongoing story line.
“In doing this, we’re going to elevate the other three and the family in general and going forward with the story that we want to tell,” he said. “I think it makes complete sense. It’s kind of a logical move.”
Readers have weighed in online, on Twitter and in comic shops about the buildup to the new issue, debating about who should die and who should live.
“Our readers get heavily involved in the lives of these characters. They fight alongside them, they share their triumphs and pitfalls,” he said. “They live with them and they grasp them very tightly to their breast. They take them on in a very one to one, very personal sort of way.”
But is death really the end and, more so, will it be permanent? After all, death has previously visited the Fantastic Four, which was created by Stan Lee and Jack Kirby.
Sue Storm, the Invisible Woman, supposedly died, but that was just a ruse. Similarly, her husband, Reed Richards, aka Mr. Fantastic, was thought dead after being caught in a blast with his archenemy, Dr. Doom. Instead of death, however, Richards and his nemesis were snatched away to another dimension.
Indeed, death is not uncommon in comic books. DC killed Superman in the 1990s, only to bring him back. At Marvel, Captain America was assassinated on the steps of a court house and returned, while Marvel’s mutant band of X-Men know death so well that the Grim Reaper is on speed dial — Thunderbird, Phoenix, Nightcrawler and others have been felled.
Roy Thomas, who was a writer and assistant editor at Marvel in the 1960s and, later, its editor-in-chief from 1972-1974, said that since comics try to mirror real life, death is always a specter.
“The thing that is the most unrealistic is that so few people (have) died, good, bad or otherwise,” he said. “If they did, they always managed to come back.”
Thomas said he hated to see a member of the Fantastic Four die, but the Human Torch may not be gone forever.
“Whether it’s Superman, the Thing or Bucky, if someone wants to bring them back to life later, you can’t bury them deep enough or tear them into enough pieces” to keep that from happening. “Death is not a permanent condition in the comic book universe.”
Joe Quesada, Marvel’s chief creative officer, recognized that death, while potent, is not necessarily lasting and that the death of a character in comics has turned out “to be very cliche” in plot developments.
“Whether the human torch comes back or not is really a question that will be answered in time,” he said.
“While I will never discount that a character can come back from the dead because it is one of the staples of comic book story telling . I’m not going to tell you if he will, or when he will and if he does, how he will, but I can assure you that it’s going to be very, very interesting and not what anyone expects.”

The White House is doing a series on its blog to tout the success of health care reform. A story was published today featuring a Brookings, S.D., woman. Read about it below, or hear Kayla telling her story in an audio clip here.

Editor’s Note: This post is part of a series where readers can meet average Americans already benefiting from the health reform law, the Affordable Care Act.

When Kayla Holmstrom was just 9 years old, she was in a motorcycle accident. While her insurance plan covered her medical expenses, she contracted chronic osteomyelitis, a chronic bone infection. Since contracting the disease she has had over 25 surgeries on her leg and her infection could flare up at any time.

Kayla is now studying to become a nurse at South Dakota State University and would have lost her coverage under her parent’s plan when she turned 24. But thanks to the Patient’s Bill of Rights that was a part of the Affordable Care Act, Kayla can stay on her parent’s health insurance plan until her 26th birthday.

Before reform passed, too many young adults like Kayla struggled to get the care they need:

The Affordable Care Act will help 1.2 million young adults remain on their parent’s health insurance plan and drive down costs for all Americans. The law also provides additional protections for people like Kayla by making it illegal for insurance companies to discriminate against anyone with a pre-existing condition.

And the Affordable Care Act helps everyone in Kayla’s generation by reducing the deficit by a trillion dollars through provisions that crack down on waste, fraud and abuse, and stop hundreds of billions in unfair and irresponsible subsidies to insurance companies that are now paid by taxpayers.

Well, here is the hottest story of the day: South Dakota Rep. Kristi Noem has been voted on by Huffington Post readers as the hottest freshman in Congress. What’s next for the Congresswoman?

Read more about it here.

Has anyone noticed how much I love funny animal stories? The story from Spiegel Online admittedly has no Yankton ties, but I couldn’t resist the urge to post it anyway …

An owl that had evidently drunk too much Schnapps from two discarded bottles was so inebriated that it got picked up by police. The bird will be released once it has sobered up.

German police said on Tuesday they had discovered a paralytic owl that appeared to have drunk too much Schnapps from two discarded bottles.

“A woman walking her dog alerted the police after seeing the bird sitting by the side of the road oblivious to passing traffic,” Frank Otruba, spokesman for the police in the southwestern city of Pforzheim, told SPIEGEL ONLINE.

The Brown Owl didn’t appear to be injured and officers quickly concluded that it had had one too many. One of its eyelids was drooping, adding to the general impression of inebriation.

“It wasn’t staggering around and we didn’t breathalyze it but there were two little bottles of Schapps in the immediate vicinity,” said Otruba. “We took it to a local bird expert who has treated alcoholized birds before and she has been giving it lots of water.”

The bird will be released once it has sobered up, police said. 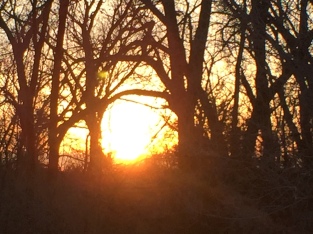 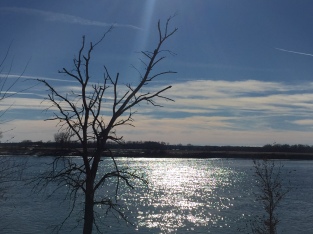 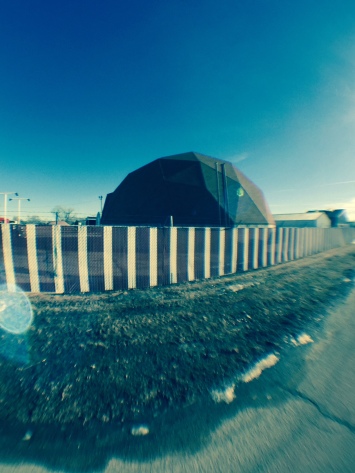 An Inland Voyage
Blog at WordPress.com.